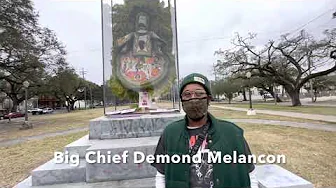 Demond Melancon, Big Chief Demond Melancon of the Young Seminole Hunters was initially taught by an inventive elder named Big Chief Ferdinand Bigard. Bigard's hand-beaded work, "Eye of God" was displayed in the Mystery in Motion exhibit. Melancon creates massive hand-beaded suits for use in ritual battles on Mardi Gras. He is featured in Mystery in Motion with a video documentary and photos of his trio of suits in honor of Ethiopian ruler and to the Rastafarians, deified emperor, Haile Selassie In spite of Mardi Gras’s cancellation, Demond Melancon, Big Chief of the Young Seminole Hunter black masking Indian, placed his suit on the pedestal that once held the monument to Jefferson Davis on the road named in his honor, continuing the tradition of resistance among black maskers.